Know The Enemy: The Life Cycle Of A Termite

What are the stages in the life cycle of a termite?

Have you ever wondered how termites grow? You definitely don’t find them as they are – in adult form – in your wooden furniture or tree stumps outside your home. Most of the time, all that you’d be left to do is to call for the termite control service to remove them for you.

Basically, the king and queen termites swarm during the hot season to search for a mate. Once they find their mates, they perform a mild courtship dance and will later on, start their own colony.

Then the king accompanies the queen in its labor. The queen can have around a hundred to thousands of eggs a day in its first year of laying eggs. Typically, the king and queen take care of its first generation young termites, but as long as there enough more workers to help them, they leave it off to them.

Today, we’ll look further at the different life stages of termites for purposes of added information. Regardless of that, you can be sure that termite control can handle termites, no matter what stage they are: egg, larvae, soldier/worker, or swarmer.

The life cycle of termites begins when two swarmers (also called “alates”) leave their colony, mate, and also search for a new territory to set up their own via flight. Suitable places like a rotting tree stump or pieces of wooden furniture count as viable colony options. These two winged termites then make a home out of this new location.

Once settled in their new colony, the alates shed their wings, becoming known as de-alates. These swarmers then transform into two new kinds of termites: the king and queen. The queen lays three kinds of termite castes: workers, soldiers, and reproductive termites (“alates”). She can lay as much as 1,000 eggs per day. Her lifespan can reach as much as 50 years.

At first, the queen lays only a handful of eggs, so the alates can take care of the manageable number. Only when the number of termites start to grow does the queen lay more eggs. This way, the colony continues to grow. 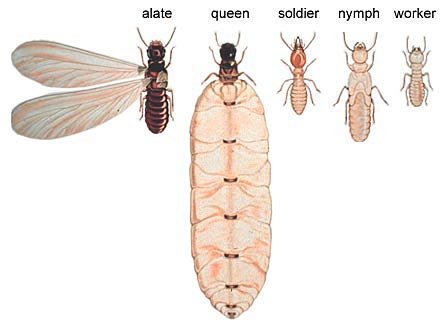 Worker termites are barren. They cannot reproduce. Their main function in the colony is to build nests and passageways, gallery, fetch food and feed it to the alates and soldiers. Workers are also blind and wingless. They have a lifespan of 1 to 2 years.

Like their relatives, soldier termites are also barren, flightless, and blind. They have large mandibles that are very useful for attacking enemies and defending their colony. However, their weapons render them unable to feed themselves, this is why they need workers to feed them regularly.

Lastly, the swarmers or alates are the reproductive termites. Unlike their cousins, they are fertile, capable of flight, and have perfect vision. This caste is the most important due to the fact that they leave the colony at regular intervals to mate and create their own, greatly increasing the number of termites. About 100 to 1000 leave their settlement once they fully mature. The life cycle then repeats itself over and over again.

Termites’ Identification as They Grow

Now that you know how termites typically grow, it’s also important to be aware of how they are truly identified.

All termites have straight pointing sensors (also called antennas) connected to their large heads. They have six legs and their color ranges from pale white to pale yellow. However, there are also times that termites may look very much like ants given that a group of termites may be of a darker color. It only differs with how the ant’s and termite’s pair of wings look like.

Moving on to a termite’s identification in the colony, they can either grow as:

Termites may grow as workers. More often, these types of members make up 90-95% of the whole colony and basically provides for the colony’s daily living.

They may be described as sterile, blind, and wingless termites. There’s no sex requirement for a termite to become worker, for the sole reason that these kind of termites are still young and immature to create a colony.

Their main goal in the colony is to take care of the other members, that includes the termite eggs, the larvae, the soldiers, the secondary reproductives, the king and the queen. Given that they are called workers, most of the tasks fall under their care.

Furthermore, their lifespan lasts for as long as two years.

This kind of termite, compared to workers, only makes up about 1-3% of the colony members. However, they share common similarities with workers given that they are also blind, wingless, and are lacking pigment.

Though soft, soldiers have a more developed head with powerful mandibles that helps them make their job of defending the colony and habitat much easier. Basically, for every other species, the mandibles differ.

More so, like workers, soldiers live for as long as 1-2 years.

The reproductive type of termites, or the king and queen, are among the few in numbers. Basically, there are at least 5-10 kings that mates with the queen in her lifetime. They are also those who swarm to find mates every now and then.

More often, the king and queen are the only reproductive species in the colony given the fact that they are mature enough to reproduce. The king keeps the queen fertilized so it can lay eggs. The queen on the other hand, starts the colony and produces sufficient amount of workers to take care of the other egg termites, and continues to produce more others to populate the colony.

Typically, queens have the capability of producing over 10,000 a day.

We hope you learned something new today from our article about the termite lifespan. To review, a colony first starts with swarmers who mate and colonize. Then they shed their wings to become kings and queens. The queen lays 3 different castes: workers, soldiers, and alates (reproductive termites). Once mature, the alates leave the colony and repeat the process all over again.

If you have any ideas or suggestions, let us know in the comments section below.