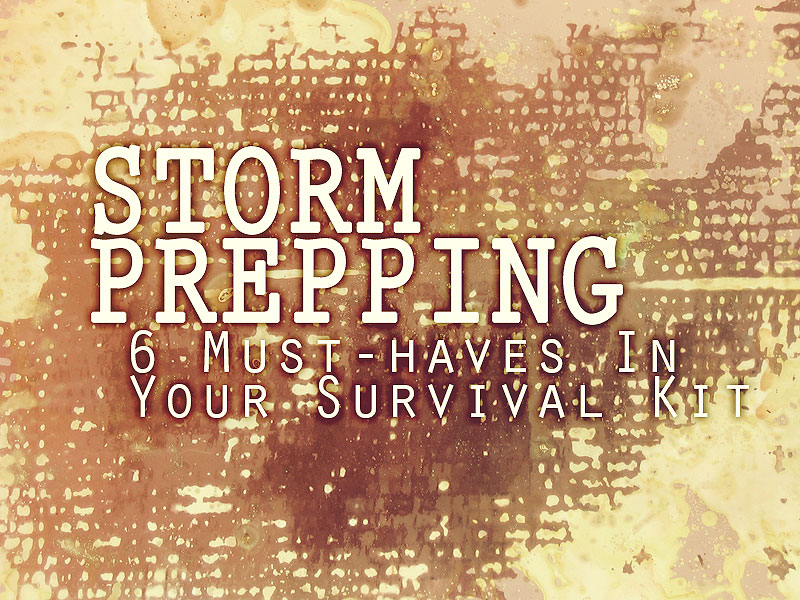 The Philippines is known to have only two seasons. Yes, two. But don’t let the number fool you. The lack of another two seasons, to make the four other countries have, only means that our only two can go to the extremes. So in our country, when it shines, we’re usually cooked, and when it rains, you know we’re safest only on top of our roofs—ironically.

Storms are one of the natural hazards that lead to disasters. Whether it’s to injuries or to deaths, disasters lead to losses. And no living individual on the earth wants that. Which is why in the season of storms, we get ready. And a smart prepper doesn’t only prepare for doom by pests—you know, by having pest control services in his speed dial—but also assures he can survive any storm.

Wow, you didn’t roll your eyes, thinking “Seriously? It’s flooding everywhere and I still need water?” You didn’t, clever citizen, because you know that water is one of the essentials in a living being’s survival—and that I meant clean water. This is your priority because you need it for drinking, cleaning your body, and flushing the toilet. Plus, only three days without water and you’re as gone as the storm that came.

Need it be explained? Food brings your body nutrients; with nutrients, you can function properly; and with you functioning properly, you may survive the storm. Have well-packed, non-perishable goods always in the home for emergencies. Canned goods (with can opener), energy bars, cereals, and crackers—no-cook food—make up your ideal diet during emergencies. Also remember that salty leads to thirsty, so better avoid salty goods.

If you don’t have your own boat or raft, it may be good to at least live somewhere with a height advantage. An elevated land or a house with a second floor is good, and both is especially better. So before choosing a home, make sure to survey that the area isn’t usually flooded. But if you are among those already living in flood-feasted areas, then evacuate somewhere safer before the storm hits. Somewhere you’ll be staying dry and away from illnesses that filthy floodwater carries is the best place to be.

Just because there’s a disastrous storm doesn’t mean you have a free pass not to shower or brush your teeth now, alright? And it also doesn’t mean you shower in the rain! Maintaining proper hygiene even in calamities means that we keep away from bacteria that may cause diseases, with the perk of smelling good. You’re lucky if you have water supply during the storm but for those without, there’s no shame in doing it the way of some Hollywood celebrities: wet-wiping. You even have more reason to do it than they do.

Since anything can happen in a calamity, and you may not be able to swim through the roads, it’s especially necessary to have first aid in the home. This is of course your band-aids, gauzes, medicines, and cleaning solutions. Also a plus to have are your ointments for the treatment and protection against bug bites. Prevention is always top of the file when it comes to cuts and illnesses, but there are also things that we cannot control—as we’ve learned in the Final Destination franchise. A branch may snap off from a massive tree outside and hit your window, which breaks then—boom! You hit your head on the wall. What you need now is first aid.

Another thing not in our control: power outages. So how better to deal with it than to complain: beat it, with light. Stock candles in your home, even up the game with scented or aromatherapy candles and fun candle holders. Of course flashlights and emergency lights have also been invented; you can also go for those. Just make sure that you’ve recharged them up to full, and that you have extra batteries. Now if those aren’t enough, just crank up the generator and your home’s alive once more.

If you’re worrying about another storm hitting, it may be because you’re not ready. Give prepping a shot, and in the next storm, you’ll be helping yourself and maybe even your neighbors.