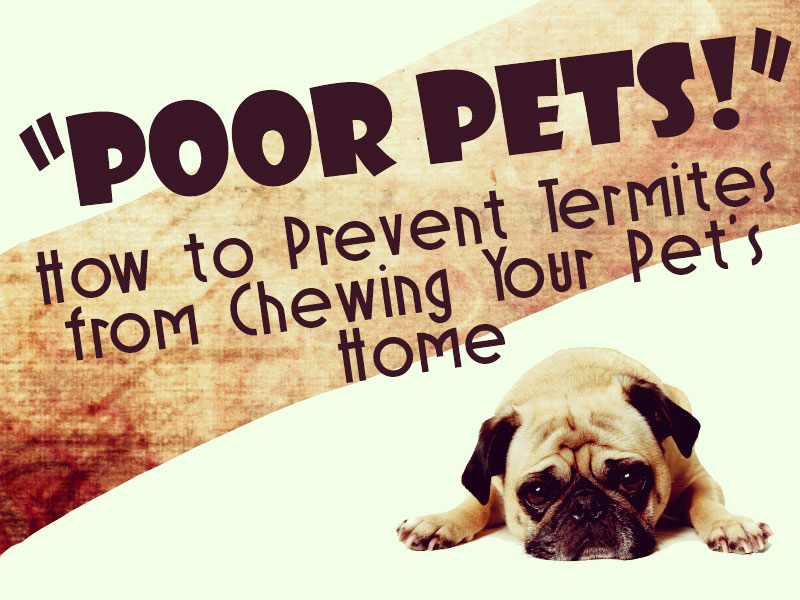 Let’s face it. Termites will be around longer than we can ever be. Pests are seemingly immortal and impervious to pain! There are just too many of them that it becomes difficult to stop them from disrupting our daily living and eating their way inside our houses and yards. It’s best to use termite control only in extreme cases so while still preventable, stop them from multiplying and destroying you or your bills will multiply and destroy your wallet. It’s annoying but the sooner we deal with them, the sooner we can get back to what we’re doing. But, first things first. Termites love wood. In all the objects that we own, our pet’s house is the one pure, varnished whole piece of wood so seductive to a termites eyes, they would steal it if they can and eat it slowly, savouring every bite. Before it’s too late, here are some ways to prevent termites from chewing your pet’s house. (No, it doesn’t involve a flamethrower).

Naturalists know termites love moist environments. For them, such a land is fertile and therefore good for growth and breeding. So above all else, make sure your pet’s house is always dry. When it gets wet, dry it immediately. No exceptions or else you might find termites making settlements inside your pet’s house — and like good little warmongers, they would fight to keep the territory their conquered in their tiny little hands.

Use A Cardboard Trap

Cardboards are excellent decoys for which to lure our annoying little critters into. Cardboards look and smell the same as wood. These attributes attracts termites. By lightly spraying water on the cardboard, the smell becomes even more powerful. Place them near a target and watch the termites group together and come closer. Once they are on top of the cardboard trap, pull it down, collect the termites and burn the living daylights out of them.

Expose the Area to Sunlight

Sunlight is for termites as onions are for aswangs and manananggals. It is their one true weakness. Termites literary die when they are exposed to sunlight because of the heat it generates. They can’t stand being hot since they were adopted themselves to darkness. So, to stop them from procreating and strengthening their numbers, expose their homes to direct sunlight.

Parasitic Nematodes are small worms that typically feed on microscopic creatures such as bacteria and fungi while some groups went further and actually feed on termites. Using these creatures, we are effectively creating a biological war by introducing a predator to creatures who don’t usually have any. This method is very effective in removing stubborn termite infections on any wooden surface.

This is the most common method of prevention. Spraying borates on any wooden surface protects the wood and as a side bonus, unlike most chemicals, don’t harm humans and their pets.

While these methods may prevent further infestation, they are unlikely permanent solutions. The best they can do is to stop termites from overpopulating, but it can’t remove all of them. That requires total fumigation! If you don’t want to pay for fumigation, start preventing before the termites spread. That way, they are discouraged from growing and wrecking your home and your pet’s and your own lives.