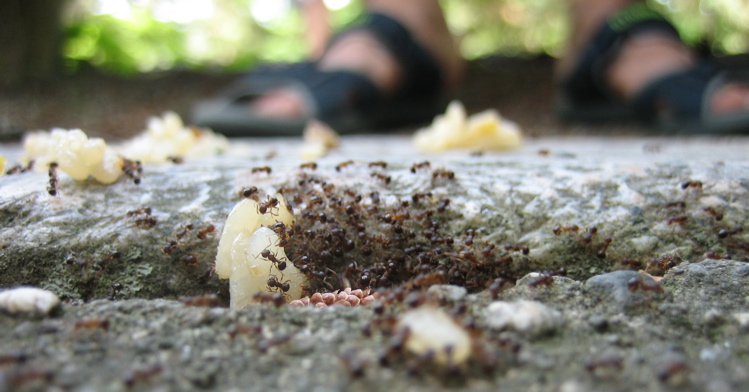 How do ant infestations start?

In the Philippines, a pest control service is most often in demand. Why? Take this scenario for example: A man and a woman are preparing for a lovely day out in a local park. The man is carrying a picnic basket, while the woman, a tablecloth. She sets the cloth on the ground, while the man sets the basket nearby, and brings out the items inside: plates, sandwiches, snacks, cutlery, two wine glasses, and a bottle of champagne.

As they enjoy their small feast, the woman notices a disturbance. Shrieking in horror, she sees a group of ants carrying their sandwiches, snacks, two wine glasses, and even the bottle of champagne. The couple watches in horror as the ants carry their food into their anthill, fitting everything inside.

Yep, you probably remembered this scene during your Saturday morning cartoons as a kid. It was funny, but it didn’t highlight the seriousness of the situation wherein an ant infestation can ruin a good day. It can be detrimental to just about anyone and can happen almost anywhere, especially in homes. Point given, it’s not a surprise that pest control services are often needed to rescue ant infested areas.

But just how does an ant infestation start? In this article, we’ll take a look at the reasons how such infestations can start within your home.

The most common cause of ant infestations is the presence of food crumbs. According to an article written by Dr. Barbara Ogg, the ants feed on sweet foods and starchy substances. Basically, they like the same kind of food we do, which is why they can suddenly invade our home and loot food from our kitchen. If you notice this happening in your home, a colony may already be developing.

Leaving food crumbs unattended can attract different kinds of ant species, which is why it is important to sweep them off the table or other surfaces. In fact, the mere act of dropping food crumbs anywhere can lead to disastrous and uncomfortable situations. For example, you are eating your favorite pastry while surfing the net with your laptop on your lap. You fail to notice the crumbs falling onto your keyboard and inside your laptop, with ants following not far behind. Come the next day, you decide to use your laptop and you find that it doesn’t work anymore. Ants can bring more than discomfort as it can bring a certain amount of inconvenience to anything you plan or are currently doing.

Two kinds of ant species to watch out for are the carpenter ants and fire ants. Aside from food, carpenter ants burrow through wooden surfaces to build nests for their colony. If they happen to nest in a wooden furnishing or area of your house, it may affect the structure’s integrity. 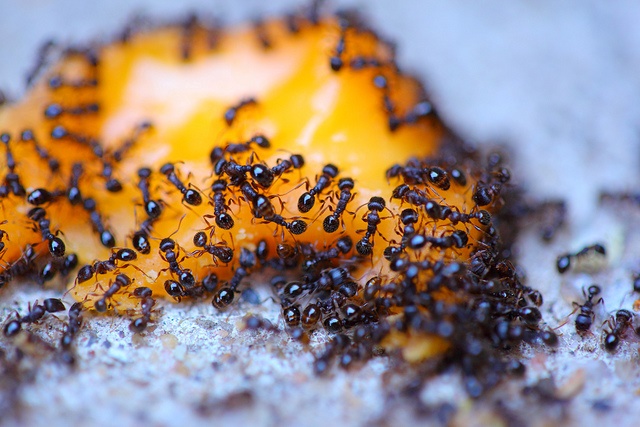 On the other hand, fire ants cause very painful bites and different reactions on their victims, depending on the kind of allergies they have. The bite of a fire ant may cause a welt that eventually leads to a white pustule, a bump filled with fluid or pus. It can also lead to an extremely itching sensation emanating from the welts, which in turn can cause minor wounds when scratched too much or too hard.

Aside from food morsels, the climate also plays a role in ant infestations. During the rainy season, ants seek higher ground due to their nest’s structure being moistened by rain. Due to this, ants seek shelter in people’s homes. The inverse is also true. During summer months, ants, among other insects, find protection from the extreme heat. If they find a house nearby, they will take refuge there and cause an infestation.

Since the weather is a matter of discussion, the notion of keeping your food crumbs above ground is of utmost importance. You wouldn’t want any ant of any kind to suddenly swarm over your area as if it’s a feast for them to enjoy

Leaving Sweets and Other Foods Out in the Open

After crumbs, leaving out pastries, sweets, and anything in between can attract a lot of ants in your home. It is important to avoid leaving any food unrefrigerated, and keep sugar canisters tightly sealed at all times…” Doing this protects your home from the possibility of an infestation.

Another thing about this is that this is not only limited to sweets. Other foods of any food group are also susceptible to ant invasions, which in turn can cause some problems within the four walls of your home. Think about it, the food you spent so much time preparing has been swarmed by these tiny creatures all because it wasn’t stored properly. With that said, the importance of proper food storage has now been greatly emphasized.

Besides food bringing out these creatures out of hiding, the notion of a dirty household is, and will always be a factor in what attracts ants. Think about it, you suddenly see ants around your home without having dropped any crumbs or leaving any exposed food.

Since cleanliness is a virtue in every household, it’s imperative to keep your home clean as much as possible. You wouldn’t want to have these tiny pests suddenly appearing out of nowhere.

Ants aren’t the only pests to be dealt with. There’s always cockroaches, rats, termites, and the occasional spider to worry about.

When it comes to getting rid of them, there are countless ways to do so. But what happens to the bodies when done so? If left where they were, it can lead to swarms of ants coming towards it and feasting on it. Sometimes, they even carry the bodies out of the area for their own disposal.

Ants are one of nature’s natural disposal systems as a majority of them devour dead animals and insects after a certain amount of time has passed. With that said, once you’ve killed other pests in your home, it’s best to dispose of them right away in order to avoid another pest problem.

There are other signs you can search for when it comes to figuring out indicators of how an ant infestation occurs. Either way, if you wish to avoid problems caused by a vast majority of minute critters, it’s best to take action as soon as possible.