People generally hate having insects in their home because they can be a nuisance and outside because, well, quite frankly they’re a bit scary. Most people would not hesitate to call pest control to get uninvited insects out of their homes.

Some people though, a few artists in particular, look at insects differently. Whether struck with inspiration or madness (depending on how open-minded you are as far as creativity is concerned), they have managed to create fantastic masterpieces using various species of bugs. And though you may not be a pro-insect guy yourself, you’ve got to admit that these works of arts are pretty good! Want to meet some of these insect-inspired artists? Here they are! 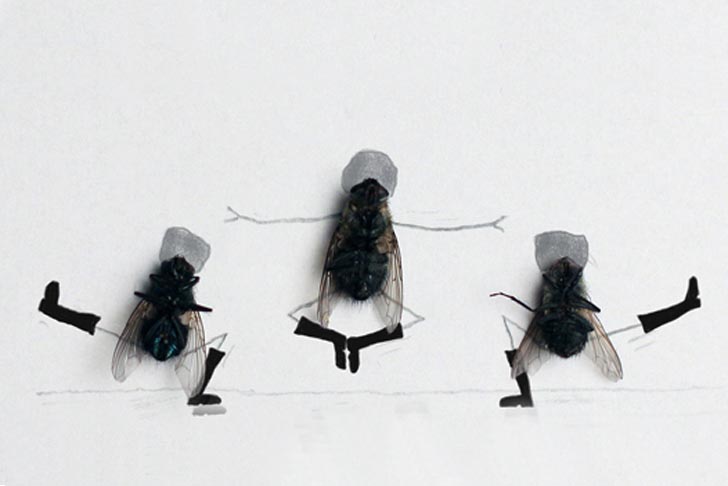 Magnus Muhr is a Swedish photographer who found dead flies lying around his house and decided to do something fun to kill boredom. Getting blank sheets of paper, a pencil, and some glue, he made funny comics depicting various human activities—with flies as the main cast! You’ll see these bugs (what’s left of them, anyway) mowing the lawn, hanging washed clothes, dancing, playing tug-of-war, and doing all other stuff that would make you burst out laughing (or keel over in disgust). 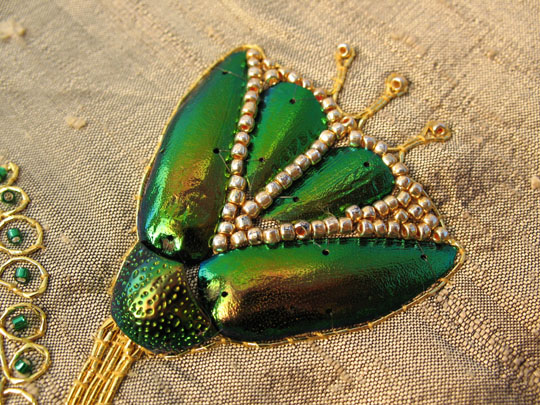 Beetle wings have been used in artworks since 650 A.D., though the craft is mostly popular in Asian countries like Thailand, Myanmar, India, China, and Japan. Today, people are trying to revive this traditional art, with Michael Cook at the forefront! This Texas-based textile artist strung shimmering green beetle wings onto his hand-embroidered fabric.

Some artists also have a thing for the macabre as well, particularly Tessa Farmer. With an array of natural materials and dead bug corpses as well as tools like tweezers and microscopes, Farmer managed to create a depiction of the battle of good versus evil, featuring eerily humanoids fairies ganging up on insects a few times larger than them. She later stated that her works are inspired from non-fiction author Richard Doyle as well as from 16th century poet Michael Drayton, admitting further that her future artworks would get increasingly more evil. 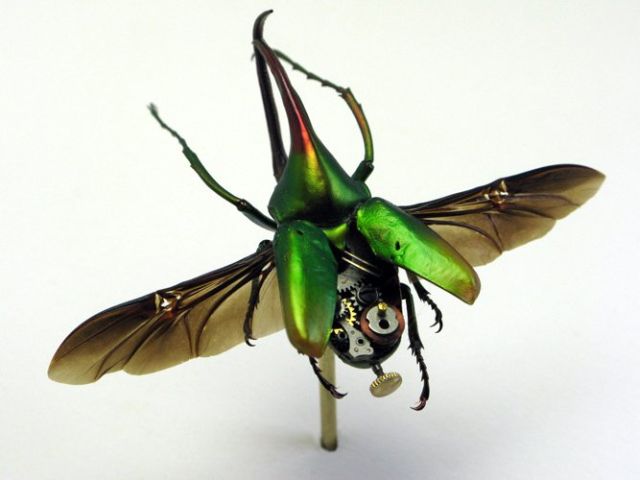 Mike Libby loved dismembering bugs just to see what makes them tick. One day, he found a dead green beetle and, seeing how similar to clockwork the bug is internally, tried to revive it by incorporating parts of his old wristwatch in it. Though the beetle didn’t come back to life, Libby did manage to create a marvelous steampunk-like sculpture, which would be the first of many robotic insects found in his “Insect Lab.” Mind you, he made a living out of this hobby, and each of his handcrafted cybernetic bugs cost around $1000! 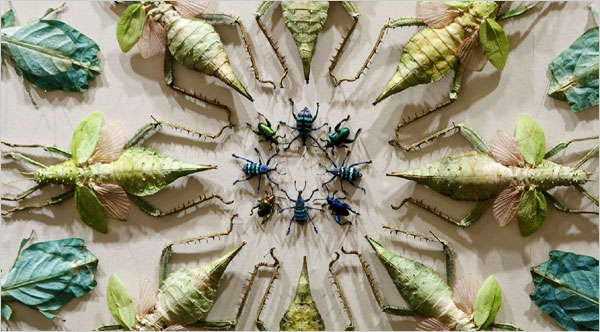 Most homeowners would be appalled at the sight of bugs crawling all over their walls. Not so Jennifer Angus! For reasons known perhaps only to her, she made original and customized wallpapers with many insects pinned down to form various artistic patterns. The best thing you can say about it is that you can easily remove the bugs since they’re pinned down instead of glued down, but Jennifer did this mainly to be able to change the pattern as she wants it.

There are quintillions of insect species out there, and we only know about 30 million of them. Though we dismiss most of these bugs for the profanities they cause our house, they are nevertheless God’s creatures, possessing beauty in their own unique way. Perhaps that’s what those five artists saw when they decided to use then in their masterpieces!