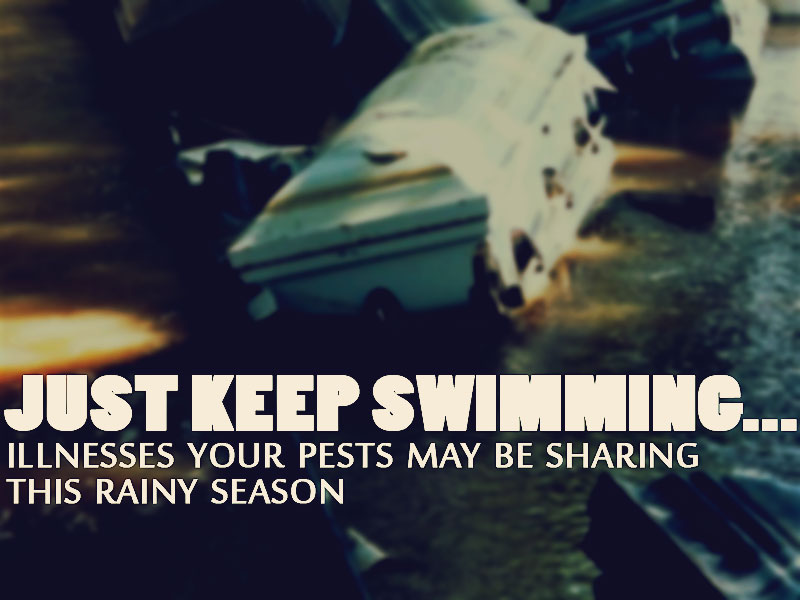 This rainy season, escaping the clutches of illness is close to impossible. There’s the usual flu that burdens many during the passing of Indays and Joses, partly because of the sudden change in weather. Of course other causes to blame are various citywide floods and their often accompanied synchronized swimming tournaments. The Philippines is that notorious when it comes to illnesses and floods, especially since among the swimmers in the risen waters are our pests.

During these times, calling upon pest control in the Philippines isn’t the priority. It’s definitely ringing for the ambulance, and immediately. Although it’s hardly impossible to be safe from illnesses this rainy season, it helps to know what you’re most likely to battle. Let’s begin with checking the possible conditions you may catch from the usual suspects—pests.

The means: infected urine through water or soil into an open wound or mucous membranes in the mouth, nose, and eyes

The aftermath: a spiral into the last level before death—or death directly

Leptospirosis is one of the most common illnesses in the book, and therefore one of the most dreaded. The bacterium that has given this illness its fame is the Leptospira interrogans, which attacks the liver, kidneys, and central nervous system. In two days to a month, so begins the manifestation of the attack through high fever, severe headache, muscle pain, chills, abdominal pain, vomiting, diarrhea, rash, jaundice, and red eyes. While some recover through intensive treatment, some relapse to the second phase which is also known as the Weil’s disease. This is the phase that brings you to your death, after causing your organs to fail.

The means: a single bite infected with a family of viruses

The aftermath: a blood fest under the skin

The wicked carrier is usually the Aedys aegypti, a kind of mosquito you most likely pet somewhere in your yard. The known “dengue triad” of fever, headache, and rash is the first blow that victims suffer. Usually follows are the more severe symptoms such as exhaustion, pain behind the eyes, joint pains, and swollen lymph nodes. And still the acute illness doesn’t end there. Dengue is known for the blood fest the victims are subjected to, by the showing of red palms and soles, bleeding gums, hemorrhage, and blisters under the skin. If you want to survive this blood-draining ordeal, better run to the ER now!

The good news about dengue however, is that once you’ve had an attack, you’re most probably immune to the virus strain that caused it—just that one.

The means: just cruising through the airspace, doing its business

The aftermath: a ride back and forth hell

It begins with the ingestion of any food or drink contaminated by the Salmonellae typhi bacterium that our dear friend, little fly, dropped. One ingested the bacterium enters the bloodstream. In its cruise around the body, the bacterium wreaks havoc through invading and multiplying in different organs such as the gallbladder and the intestines, as well as the biliary system. Thus begins the host’s ordeal through high fever, headaches, poor appetite, abdominal pain, and chest congestion.

As gross as it is, your fly may have gotten the bacterium from a stool it touched somewhere; typhoid fever may be passed through the fecal matter of its victims. And when it rains, your city’s sewage system is just tested—well isn’t it?

Remember that the rainy season can bring you the most unexpected of surprises, in the form of illnesses, so beware and prepare. With these pests lurking around, every single one of us is in deep danger. Stay cautious!