Scorpion Fly: A Product of your Nightmares…NOT!

One of the reasons why we call pest control is because of the diseases that insects carry. Examples of these insects are flies, mosquitoes, and cockroaches. But we must admit this: the insect world is perhaps one of the most fascinating and colorful worlds in the whole ecosystem. Some are fierce assassins with stealthy moves, others adapt to the environment or to their potential predators, while others possess colorful exterior to attract potential mates and even preys. There are also bugs of various shapes and sizes (yep, there are gigantic bugs out there in the wild). But what made the insect world a fascinating one is its bizarreness. Take, for example, scorpion flies.

What are scorpion flies?

Scorpion flies. Scorpions are scary enough with their pincers and their stingers which contain venom that can kill anything. But flying scorpions?!

Fortunately, scorpion flies of the order Mecoptera are not as scary as we think they are. They are any several species of insects that are characterized by having chewing mouthparts at the tip of an elongated beak. They also have an enlarged abdomen. They got their name from the way in which the male scorpion fly holds its genitalia over its back which is closely similar to that of a scorpion. They use this “stinger” in courtship displays with the females. 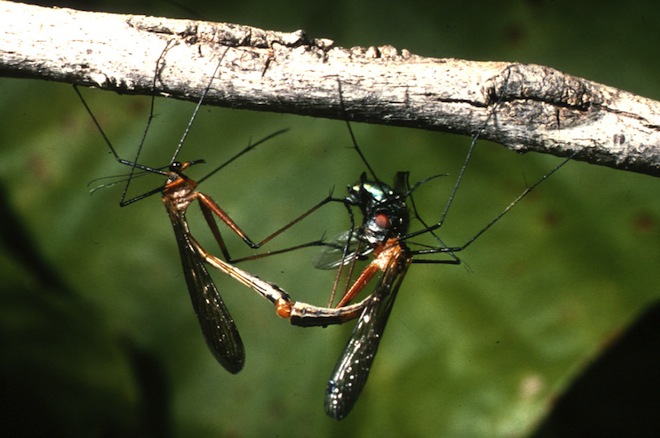 Scorpion flies are often found in places that are abundant with plants such as farmlands, grasslands, heathlands, uplands, woodlands, towns, and gardens. They live in these areas because they mainly feed on decomposing matters, especially those of dead insects, and sometimes feed on plants. They also have the habit of stealing contents of spider webs.

Other than decomposing matters and plants, scorpion flies also feed on other smaller insects by hanging suspended from a plant branch in order to blend into their environments and pouncing on their preys. Because of this behavior of hunting for food, scorpion flies are also called “hanging flies”.

A scorpion fly’s role to the ecosystem

Are they a threat to humans? Fortunately, scorpion flies are not harmful despite its threatening name. In fact, they can be advantageous to humans and nature. Their main role as scavengers plays a great role in the balance of nature. 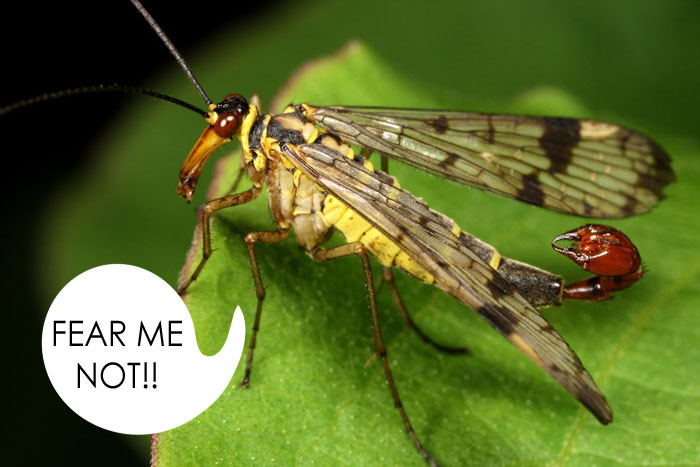 They are also not venomous since their “stingers” are genitalia – which are only found on male scorpion flies. And to make it more amazing scorpion flies do not infest indoors since they can only be encountered outside, therefore, you don’t have to worry about their potential “attacks”.

Despite the scary name and bizarre appearance of an insect, we should always take into consideration their role in the ecosystem. As much as possible, if they do not pose any hazard to your home or health, just get them out of the house and leave them be!