The Sparassidae or huntsman spider is among the best spiders ever to crawl the earth. Big, fast, powerful, they’re great predators in the insect world. They come in many species and though most of them seem hostile to us humans, some of them can act as some sort of pest control for your home since they have an appetite for cockroaches. Well, if you can stand having them in your home, that is.

Let us introduce you to two known species of huntsman spiders: the Giant banded huntsman spider and the Jungle huntsman spider. Despite both being members of the Sparassidae family, these two have been arch-nemesis for God knows how long. And when a clan member meets the other, only one comes out alive! Here are the contestants: 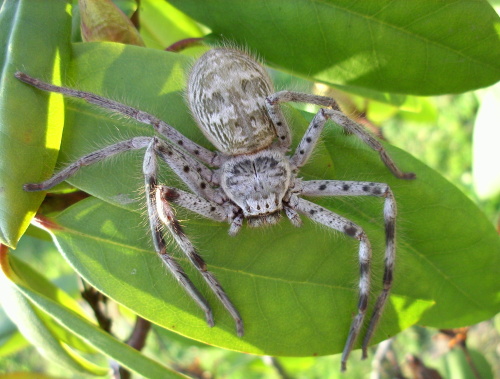 The Holconia or Giant Banded Huntsman Spider (GBH for short) is among the largest members of the Sparassidae family, reaching up to six inches across or larger! Its legs are specially designed to hinge sideways, enabling it to lie flat as well as to jump in any direction. Its legs are also bristled with thin, fine hairs that detect prey, making the Holconia a walking seismometer. Aside from its legs, the GBH is also equipped with two monstrous fangs as well as a set of eight keen eyes! It’s a sit-and-wait hunter, and when something comes within its range, it runs after it with incredible speed and grabs it. All these makes the Giant Banded Huntsman Spider a formidable opponent to mess with. Sometimes, though, even the great Giant Banded Huntsman Spider meets its match! 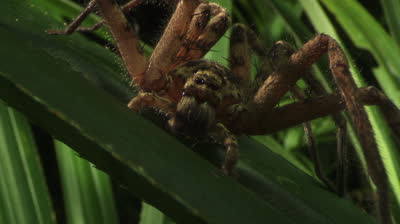 What it lacks in size, the Jungle Huntsman Spider (or JH) makes up for in speed. The JH is equipped with every arsenal the GBH has, plus two secret weapons. The Sparassidae family is known for being quick, able to run and react faster than other spiders. However, the Jungle Huntsman Spider is the fastest of them all with its “hydraulic” legs! Blood flows through each limb, inflating it and increasing pressure and jumping power. Its second arsenal is stealth. Due to being smaller than other members of the Sparassidae family, it can easily hide within its surroundings.

When these two opposing master huntsman spiders cross paths, it’s only a matter of time before they start ripping each other’s limbs off. The duel can go either way since both are capable and vicious predators. On one hand, the Giant Banded Huntsman Spider is bigger and stronger. On the other hand, the Jungle Huntsman Spider is faster and stealthier. At the end of the day, whichever spider lives or dies depends on which between them is faster and stronger. Mind you, the first spider to get its underbelly skewered would likely end up as the other’s free meal.

Spiders go to war like any other insects, and sometimes civilian casualties include us humans who want nothing more than to rid our homes with these pesky creatures. So the next time you sense these arachnids prepare for battle, better make sure that your nearest pest control is at hand to make sure that things don’t get out of hand!