You may not know it, but ants and termites have been at war for millennia. Though both are a nuisance to humans, these two different pests have been at each other’s throats for God knows how long that the casualties of both sides number millions, if not billions. Somehow, this conflict has helped us reduce these vermin in our home, although calling termite control is still the best thing to do for severe infestations.

Believe it or not, ants and termites wage war very much like humans. In other words, they need strategy, tactics, and the best soldiers. More often than not, termites get beaten by ants due to the latter being more evolved and organized. Let’s take a look at some specimens of both ants and termites to better appreciate their fighting capabilities against each other.

Commonly called Matabele Ants, this species are highly sophisticated when it comes to battling termites. They usually focus their raiding on dawn and dusk, between 6:00am to 10:00am and 3:00pm to 7:00pm respectively. First, they send in scouts to the termite’s colony; this team is very good with reconnaissance and the scouts leave a pheromone trail on the return journey so it can better lead the main army to the enemy territory. The ant host then marches towards the termite’s homeland in a column formation, each soldier leaving a pheromone trail for their comrades behind.

About 20 to 50 cm from the termite nest, the ants stops their march, waiting for the rest of the column to gather around their leader. Once their all present, they start their attack. The ant army is divided into two battalions: the major workers and the minor workers. The majors focus on making openings on the termite colony and the minors rush in the breach to overwhelm the enemy. The battle is more feast than fight as one termite after another gets killed; it was all they can do to hold their enemy long enough to close off all entrances. Afterwards, the victorious ants return to their starting point in an organized formation, bringing some of the enemy corpses with them to eat later. This termite specie lives in Vietnam, with some relatives in nearby Malaysia. They have two main arsenals against ants: their large heads and mandibles, and a special technique called autothysis. When their home is under attack, some termite soldiers block all entrances while others lead sorties to kill off as many advancing ants as they can. Their heads are large enough to deny entry to the ants, and termites at the front line can take down many foes before being torn to pieces themselves. Some dying soldiers take it upon themselves to block the entrance with their heads, delaying the ants long enough for the worker termites to close it off completely.

Meanwhile, the sortie fights off the ant host. As a last desperate measure, they would use their final trick, autothysis. This involves committing suicide, rupturing itself to secrete a yellow liquid so sticky that any ant that steps on it gets stuck. This fluid also has pheromone that can attract other soldier termites to come to the rescue. While gaining a pyrrhic victory, the termites get to live another day at least. 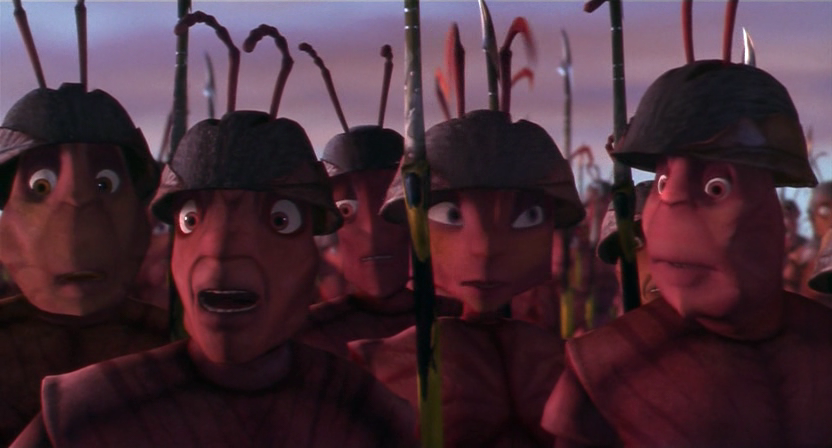 Aware of their enemy’s superiority over them in terms of combat, this termite breed chooses to ally itself with certain ant species. One of these is the Monacis bispinosa, who cannot prey on live termites and who can be killed by their chemical defenses. These alliances tend to be tenuous at best as some types of ants hunt even their own kind. As with other termites, the Nasutitermes corniger can only delay attacking ants long enough to block entry to their hive, sometimes using autothysis as well.

These are only three types of ants and termites; there are thousands of different breeds out there, each with its unique fighting capabilities. The fight rages on even as we discuss them here. Better call pest control in case things get out of hand!