How To Identify Different Kinds Of Termites 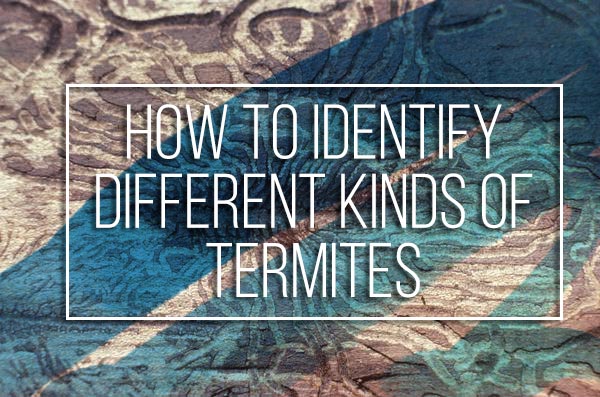 What are the different kinds of termites?

In order to win in any battle or war, you must know your enemy. How he/she looks, thinks, and acts. This will definitely give you a tactical advantage on how to best defeat them. 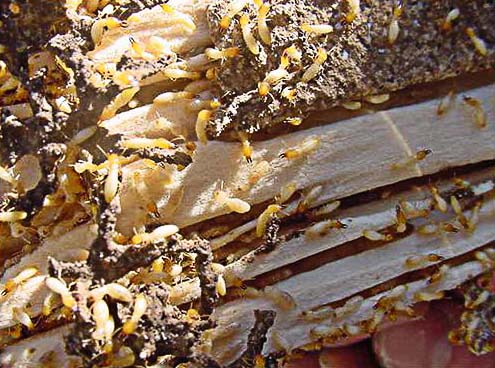 As the name implies, these termites can be found underground. Though they make homes for themselves in mounds above ground, they are known to create intricate tunnel systems for themselves beneath the soil. These tunnels act as passageways for them to easily access food sources.

One must remember that termites need moisture to survive. Otherwise, the intense heat will kill them. The moisture found in the soil is more than enough to sustain them.

Subterranean termites eat only soft spring wood fiber. The holes they leave in their wake are as large as honeycombs found in bee lairs.

These kinds of termites have black-colored heads that are a bit larger than their bodies. 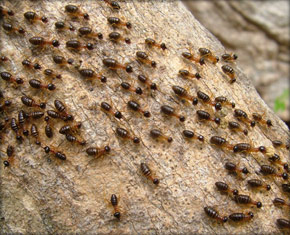 These are perhaps the most common wood-eating insects you can find anywhere. If happened to discover hollow tunnels or holes visible through your wooden furniture, you can be sure drywood termites have infested that particular area.

Unlike other species of termite, drywoods can live in dry areas much longer without the need for moisture, as they get all the moisture they need from wood they consume and its own metabolism to digest the cellulose-based material.

Another interesting fact about drywoods is that they also inhabit the wood they eat. Meaning your wooden table or chair is not only a choice food source, but also a home for them.

In terms of appearance, they are a bit opposite from their subterranean cousins. Their heads are colored brown, a bit smaller in size, while their bodies are a bit larger.

In terms of appearance, they are bit opposite from their subterranean cousins. Their heads are colored brown, a bit smaller in size, while their bodies are a bit larger. 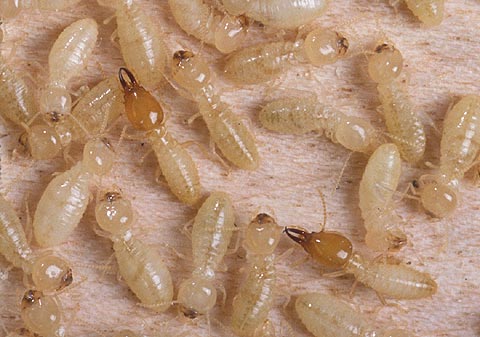 Formosans are a kind of subterranean termite that are larger and don’t need to live in the soil to survive. They are also much larger than other termite species and are discernable with their yellowish-brown body color.

Formosan soldiers are pretty distinguishable among the other members of the colony, this is due to their heads, which are oblong shaped compared to the other subterranean termite specie which are rectangular shaped. Plus, most of the time, this type of soldier termite is the most aggressive when protecting the nest. In the event that they are disturbed, they tend to release a white liquid that they use for defense.

This type of termite specie typically nests in the soil, and invades structures from within that area to the entry point that they can access so long as it makes contact with the soil. They are also able to build cartons (nests made of undigested cellulose, soil, and chewed wood inside the colony) to retain water and moisture until such time that they are able to find a permanent source of water. This, then, is what helps them build nests without returning to the soil. Hence, with or without the presence of soil, they are able to survive as long as there is cellulose that they can feed themselves.

Formosan termites are also the most destructive termites. This is due not to their speed in eating, but their sheer size. The bigger they are, the more they are likely to consume larger portions of wood.

This termite specie can be found in damp, decaying wood such as logs, stumps, and dead trees. Like subterranean termites, they need moisture to survive. They are much larger than subterranean termites and have a more proportionate body size when compared with other species. Due to their size, soldiers reach 20 mm in length, while swarmers 25 mm.

They leave very little damage, with the signs of damage dependent on how decayed the wood is. Also, they do not nest in the soil. All they need is the wood, more so if it’s decaying.

Dampwood are predominant in the Pacific, and are considered as an economic pest. This is because they cause greater damage to various infrastructures that is significant to the country such as residences, forests, and building materials.

Typically, swarmers start a colony by seeking for an appropriate piece of wood wherein they can create a chamber in it. The queen then lays a decent amount of eggs in its first year, and while this may appear as small compared to other termite species, this becomes relatively large depending on the circumstances.

Conehead termites are mainly identified from their dark, cone-shaped heads. The colonies of this type of termite species are commonly made up of soldiers, usually between 20-30% of the group. This is unusual compared to those of drywood and subterranean termites where soldiers only take up 1-2% of their colonies.

This type of termite specie can also be identified through the tunnel that they tend to create. Usually, they build a wider and a more extensive tunnel than other termite species. Their nests also differ given that it appears as an open type of nest, often located in a tree, and looks like a large, dark-colored oval or round shaped ball.

Having introduced in Florida, the conehead termites have spread far and reached the southern part of the state. Surprisingly, it’s considered a drywood termite type, and has its roots from the Carribbean and other Central American tropical countries.

With regards to their colony, conehead termites usually keep their colonies hidden. Though after a few years of maturity, these then appear above the surface, most particularly in buildings, trees, or shrubs.

Likewise with any other type of termite specie, the conehead termites consume cellulose-based material, either that be trees, roots, furniture, rails, or paper products.

We hope this very detailed article taught you how to identify different termite species in your home. If you have any ideas or suggestions, sound off in the comments section below.