The Most Hated Insect in the World: 7 More Reasons To Hate Cockroaches 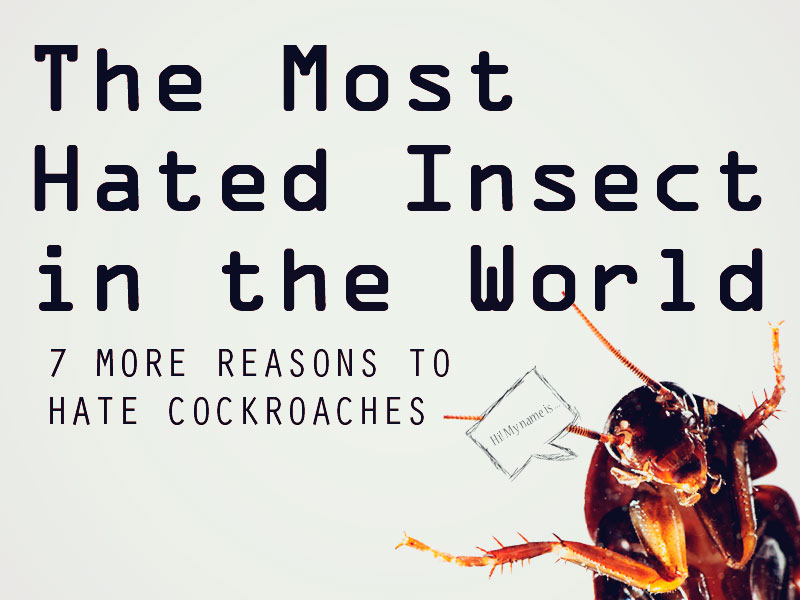 Just the word makes you cringe, even scream. You may not know much about this simple critter, but that doesn’t stop you from despising it with all your being. Those hairy legs, flat wings, and dark coffee tone are the makings of your nightmare.

Maybe you’ve woken up in the middle of the night to the pats of this fellow’s little feet on your arms—under your sheets. Or maybe your restaurant has been frequented by a new kind of customer—the health inspector—and he’s looking for a new item on your menu. You try to rid yourself of cockroaches, but you just don’t know which pest control to use best here in the Philippines.

Better understand why cockroaches are the loathsome bugs that they are before choosing your pest control.

They breed in thousands

Momma and poppa roach are not so busy at being a couple as they are of wandering around your kitchen and finding food. They mate only once but when momma roach pops out those eggs, she makes sure it’s a whole colony’s worth of little the. Think 300-400 and beyond. Development of the eggs to adulthood takes 3-4 months but once they’re fully developed, they can live up to four years. But that is, of course, if you don’t get them first.

They eat what you eat

Cockroaches are generally attracted to sweet and starchy food, called even by the smell. They crawl through your kitchen with or without you knowing. Think of the crumbs of your favorite ensaymada left on the floor, or your bowl on the sink, bits of rice left unscraped. Think of your trash bin, too. Is it left in the home and open? *Cue dundundun music here.

They fly and they’re fast

Roaches are already wicked and disgusting as they are, and you’d probably be alright with them crawling about as long as they don’t come near you, right? Of course (not). But then you see those flat, wisped wings you think are useless, twitch and then spread out. And the next thing you know, you’re screaming— a scream reminiscent of those in old horror films. Those wings are not so useless after all.

They live in clutter

They say one man’s trash is another man’s treasure. That black bag in your kitchen may be for your leftovers and wrappers, but to cockroaches, that’s paradise. Roaches also thrive in moisturized environments. Remember where you shower and relieve yourself? That’s most likely their playground.

Since roaches are not particular with the surfaces that they crawl on, they can pick up and carry poison from one surface to another, including on your food. They are not like ants that are known to clean themselves, and the only thing they do that is slightly hygienic is relieve their bowels. So with roaches around, you cannot be certain you’re safe from typhoid, dysentery, polio, salmonella, eczema, or asthma.

They can last weeks without food

Eating is essential for living beings. For cockroaches, on the other hand, eating can be considered only a pastime. While they prefer sweets, they can also eat just about anything, from grease to glue—not the usual food for us. They can last weeks without food altogether, too.

They can live without their heads

Yes, you read that right. You and I need our heads for your whole body to function. As for cockroaches, they need their heads only for feeling with their antennas and for drinking with their mouths. They breathe with segments on their bodies, and do not really have a complex system for the brain to control so they can last a week without it. They only die later as they have no means of drinking water.

Cockroaches are freaks of nature that you must get rid of at all costs. It is difficult, as these critters have been roaming the world since the time of dinosaurs! But then again, so is your hatred for them, right?