Keep your Eyes Open! 4 Other Wood-Eating Insects to Watch Out For 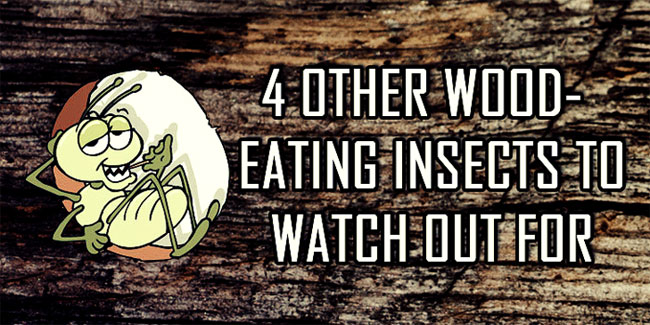 Termites are one of the causes of destruction in our houses because of their wood diet. Because of this, we contact a termite control company to eradicate these pests. But then, there are other insects that won’t really mind munching on different woods.

Check this list out to see whether or not your houses are infested by these wood eating pests.

Carpenter ants are large black or reddish-black ants that build their nest in cavities above the ground, such as tree stumps, walls, subfloors, and roofs of houses. The cavity, found by the queen, expands and enlarges as the colony grows bigger. Because of their worker ants’ excavation, the wood itself is ruined.

To make things worse, satellite colonies happen when the original colony grows too large – meaning that they may do more damage to more parts of the house.

Lyctid powderpost beetles are small beetles, about ¼ inches long, with reddish-brown to black colors. Their bodies are elongated and slightly flattened, with their head prominent and not covered by the pronotum. They rarely infest wood older than five years old – making new homes or newly manufactured furniture or articles potential targets.

Anobiiid powderpost beetles, on the other hand, are smaller than lyctid powderpost beetles with a length of 1/16 to ¼ inches long. They colors vary from reddish brown or grayish brown to dark brown. They have cylindrical and elongated bodies that are covered with fine hair, and their heads cannot be seen because they are covered with a pronotum. Anobiid powderpost beetles infest structural timbers made of softwood such as beams, sills, joists, studs, subfloorings, and plywood. They also infest hardwood furniture, wall paneling, window and door molding, and hardwood floors made from maple, beech, poplar, and pine.

Last are the bostrichid powderpost beetles. These species of powderpost beetles are perhaps the biggest, with length ranging from 1/8 to ¾ inches. The color of their elongated and cylindrical bodies also varies from reddish brown to black. Just like the anobiid powderpost beetles, their heads are also covered by pronotum. They infest seasoned softwood and hardwood, especially unfinished floors, window sills, and furniture.

Horntail wasps are large insects with long and harmless “stingers” which may often infest newly constructed houses of up to 3 years old. The damages that horntail wasps do involve putting holes to the walls and floor coverings. Why so? Wasps emerge from softwoods (which act as exit holes to them) which are the usual components of walls and floors. Luckily, these insects do not do further damage, especially because they do not reinfest a place.

One of the best ways to prevent further damage is by contacting a great pest control company. Hurry up and call Topbest to know what we’re talking about.