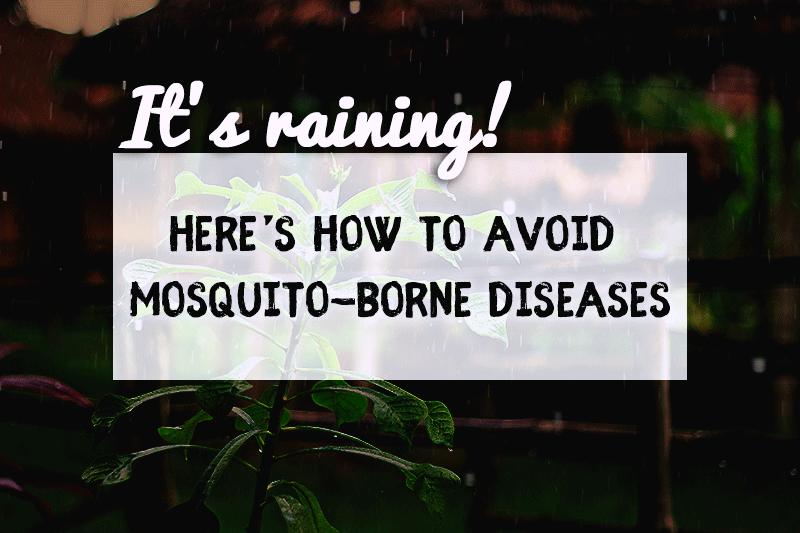 Notice the change in weather lately? Say goodbye to endless days of scorching heat and say hello to the rain, as wet season is here! Too bad it also brings about an increase in the number of mosquitos and other disease-carrying insects. In the Philippines, mosquito control is an active health campaign that is dedicated to preventing mosquito-borne diseases.

A high-rate disease caused by RNA virus, dengue is transmitted by an Aedes aegypti mosquito. Symptoms of dengue appear three to seven days after an infected mosquito bite. Most common symptoms include: severe joint and muscle pain, high grade fever, skin rash, severe headache, nausea, vomiting, and fatigue. They say there are ways to cure dengue at home, but it’s still much better to have the possible infected person checked by a doctor immediately to avoid worsening.

Similar to dengue but more benign, chikungunya caused by RNA virus and transmitted by an Aedes albopictus mosquito. The most common symptoms experienced by a person infected with chikungunya are fever and joint pain.

Malaria is a life-threatening disease and is still considered a major health problem in the Philippines. It is caused by Plasmodium parasites transmitted to people through the bites of an infected female Anopheles mosquito, called ‘malaria vectors’. Notably, there are five parasite species that often cause malaria; however, among these five are two species that poses the greatest harm, namely:

Typical symptoms of malaria appear 10-15 days after the bite. These are usually relatively mild cases of fever, headaches, and chills, and therefore may not be quickly distinguished as malaria. If not treated within 24 hours, the malaria parasite P. falciparum may progress to severe illness which can then lead to death.

Symptoms of these diseases may initially start so mild that it is waved off as nothing serious. However, if not treated they may lead to more severe illnesses. Prevention is always better than cure. Place effort into making sure that mosquitoes don’t breed in your home to minimizes the chances of these disease making their way into your home.

Mosquitoes breed in still water. Mop up areas like the kitchen, bathroom, and laundry area where water tends to collect. Check screen doors and windows to make sure that there are no holes where mosquitoes can come through. If you don’t have one, consider investing in them.

Due to the rain, you’ll be surprised with the amount of water that accumulate in the most random areas just outside your house. Garbage bins, pails, pet food bowls, and the like must consistently be emptied and turned upside-down if empty. As per the Department of Health of the Philippine government, here are ways to conduct mosquito control within your territory:

Protecting You and Your Family

It’s impossible to keep your eye on the family 24/7. Even if you do, these little buggers could go unnoticed until it’s too late. There are extra precautions that you can take to keep you and your family safe even while you’re sleeping.

You do not need to spend much on prevention; in fact, the most important parts are cleaning your surroundings and maintaining proper hygiene. Let’s not use the wet season as an excuse to being irresponsible – to achieve a healthy environment, we should begin with ourselves.