Black Bugs and Their Effects on Rice Fields 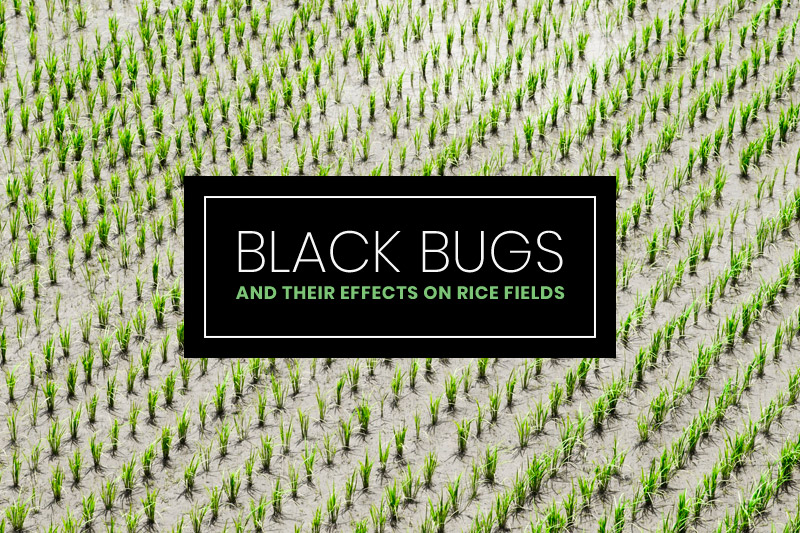 No matter where you are, black bugs aren’t that hard to find. Where there are trees and dirty places, there are bugs. Most kinds don’t really pose any real, direct threat to people, but the way that some species affect their surroundings can be harmful to humans.

Bugs, in general, are frowned upon by many, primarily because of the way they appear and the potential diseases that can be contracted through them. Some bugs are completely harmless to both humans and nature, but others are either harmful to one or the other—sometimes both. This has led to people panicking whenever they see such insects, regardless of specifically how they look like. If it’s small, has six legs, and is crawling, stay away from it at all costs.

Health is always a major concern, so this is understandable. However, while it may appear that bugs are only capable of doing damage when you let them get to you, they can actually do much more than that. In fact, at this very moment, bugs—rice black bugs, in particular, are wreaking havoc in various places.

And these aren’t just bugs with a black coloration; they are known better as black rice bugs, and they have always been a large thorn in the sides of many, farmers especially.

About the Rice Black Bug 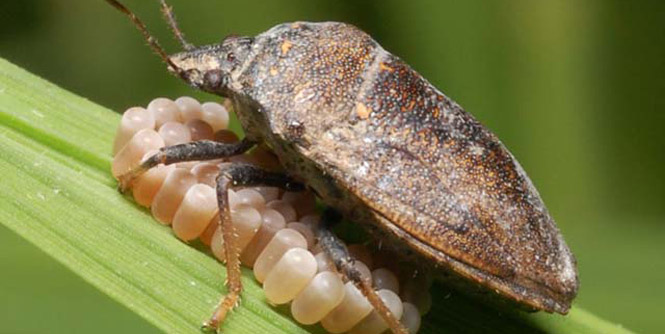 Rice black bugs, or Scotinophara coarctata, are insects from the Pentatomidae family. There is no specific date when it was discovered, but it is believed to have first appeared around 1979.

While there have been reported incidents of rice black bug appearances in the countries mentioned, they are more prevalent in countries which are subject to frequent rainfall and have irrigated environments.

The Stages of Life of Rice Black Bugs

Rice black bugs, similar to other bugs, start out as eggs. They are 1 mm long and initially have a green coloration.

Over time, the color changes to a more pinkish shade, which indicates that it is about to hatch soon. It takes three to five days for a rice black bug to hatch out of its egg.

Once the egg has hatched, a nymph comes out. Black bug nymphs have are brown in color. They undergo the process of molting every four to five days. Rice black bugs take 25 to 30 days before they fully develop into adulthood.

After the nymph stage, rice black bugs enter the final stage of their life cycle: adulthood.

Adult bugs have distinct yellowish marks on their backs. It is during this stage that black bugs reproduce, and they can lay eggs up to three times. Adult rice black bugs have a lifespan of about 22 days.

Male and female rice black bugs have similar characteristics such as being fast flyers and only appearing when there isn’t too much sunlight, but there is a notable difference between the two of them.

An adult female black bug has a round and slightly protruding stomach, and is noticeably larger in size compared to other bugs.

A male adult black bug doesn’t have the shape and stomach of a female. They are smaller than females and have flat bellies.

Black Rice Bugs in the Philippines

It was in Bonobono, Bataraza, Southern Palawan where the first incident of rice black bugs was reported. That was during September of 1979, and since then, the outbreak of the pests on rice and swarms around illuminations at night have been reported from the south to the north of the island.

Rice black bugs have never been found in any of the Philippine islands before 1982, and they had been biogeographically associated to the landmasses west of the Wallace’s Line.

Like the brown planthopper, rice black bugs are weak fliers, and they were likely displaced by the wind. Another possibility is that they gained entry into Mindanao through insects swarming on boats that operate from Borneo or Palawan.

When rice black bugs feel threatened, they give off a foul odor as a defense mechanism. 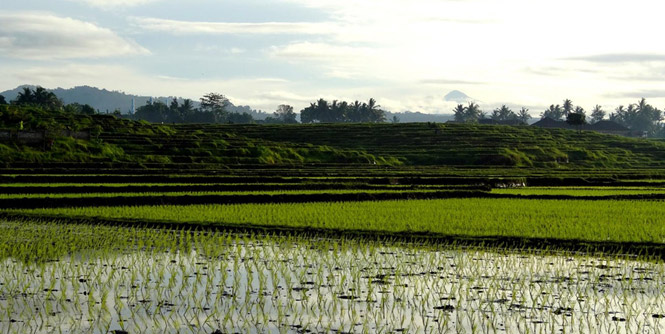 In the Philippines, rice crops are extremely important. It is a staple food in daily life, and it is present in both homemade and gourmet meals almost 100% of the time. Indeed, the county has vast reserves of rice—enough to feed everyone in its islands, and enough to export to other countries.

The climate and the environmental conditions in the Philippines aren’t the problems—in fact, they are perfect for growing rice crops. The problem lies in the pests, rice black bugs to be more specific. The amount of damage they can do to the fields is astronomical, considering their size.

Rice black bugs have no direct harm to humans, but they are immensely aggressive towards rice. These bugs feed on a number of grasses and broadleaves as well.

Rice crops infested by rice black bugs can be identified fairly easily—signs can be found all across different parts of the crops.

Grains of infested crops become deflated over time. Additionally, they become dry in texture, due to the bugs sapping them of nutrients—this is also known as bugburn.

Very noticeable are the leaves of crops infested by rice black bugs—they are stunted in growth, and they don’t have the green coloration that healthy crops do.

If crops are attacked by rice black bugs and they aren’t contained, the crops are almost certainly doomed. The infestation may begin in just one localized area, but the speed at which it spreads to surrounding plants is high and is exponentially increasing.

Even if a few crops manage to be clear of bug infestation, there is still a pretty good chance that the grains they produce aren’t normal in size. These pests have a destructive yet profound influence on the growth of the produce and should be attended to as soon as the earliest signs of infestation are seen.

The degree at which rice black bugs can ruin crops is incredible—just ten bugs per stem in a field can potentially decrease the overall harvest by 15% to 23%.

Rice black bugs have been wreaking havoc ever since its discovery in Palawan in 1979. The year 1982 saw around 1200 hectares of rice fields across 4 municipalities in Palawan damaged by black bugs.

In 1985, a major outbreak of these bugs spread towards Central and Northern Palawan.

Approximately 2000 hectares of rice fields in Mindanao were attacked by rice black bugs in the year 1992, affecting the lives of nearly 2500 farmers. Estimated losses in production were around 2.2 million.

In the year 2000, black bug infestations in Leyte, Visayas were reported, with about 6000 hectares of rice fields being affected.

The Incident at Pangasinan

During the last quarter of 2017, areas in Pangasinan experienced a major infestation from rice black bugs. It was both unbelievable and disturbing, as the bugs infested not just the crops—the number of bugs was mind-boggling, and they spread to even residential and commercial areas, disturbing the daily lives of both farmers and civilians.

Rice fields were flooded with millions of these pests, and even houses, streetlights, and pavements crawled with black bugs. Despite efforts by agricultural technicians and farmers, they were too many and too resilient to contain.

Almost 50 hectares of crops were reported to have been damaged by rice black bugs, which equates to 70% of the overall harvest. Rice fields in Pangasinan were compromised, and the livelihood of around 100 farmers was severely affected. 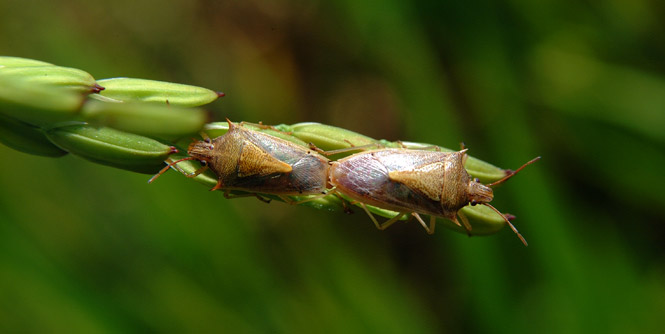 Black bugs are tenacious creatures and containing them could prove to be a difficult task, but it isn’t impossible. There are appropriate ways to control the infestation, and following them closely will greatly contribute to alleviating the crops of pests.

Just remember—prevention will always be better than cure. However, it’s no one’s fault if black bugs attack crops. It is their nature, and the best course of action is to follow the tips below:

It’s easy to relate pests to pesticide—one word is literally contained in the other.

However, pesticides aren’t the answer to everything related to pests.

Pesticides can do more harm than good. For one, it is made of poisonous chemicals, which are dangerous to plants. Even if they were successful in killing the pests, there’s a pretty good chance that by that time, a considerable amount of crops has been contaminated as well. In the case of rice black bugs, pesticides aren’t recommended at all, as the crops they infest are major sources of human food.

Make use of biological control agents

Spiders may not be welcome in a home, but in a rice field, they are your friends, and so are grasshoppers and other insects. They aren’t there so you could tangle webbing all over your thighs or jump around you—they are actually quite great at eliminating pests.

While the effects aren’t instant, biological control agents provide great help in controlling infestations. Spiders, for example, can trap multiple pests in their web, and eat them—if you have any unwanted ones in your home, it’s a great idea to release them into the field rather than kill them.

Flowers can be home to biological control agents, and can be a source of food for them. Planting flowers helps extend the lifespan of these organisms.

Baits have been used for centuries, and that is because they work.

Rice black bugs are no exception to them. Some baits that could be used for these pests include rotting meat or fish—place just outside the field, and wait for the pests to come. Afterward, capture them with a net, and burn.

True, weeds are plants too, but that doesn’t mean that they are necessary for the proper growth of the crops. Weed growth should be monitored and controlled as well, as they can be home and a breeding place for pests as well.

Harvest at the same time

Harvesting at the same time means that more people will be able to comb through the fields at the same time. This can effectively drive away pests instead of just forcing them to transfer from one area to another.

Plowing the fields can successfully destroy the nests of pests.

Maintain a level of water in the fields

Water can repel bugs from the stems of the plants. Additionally, water can disrupt the development of the pests while they’re still inside their eggs.

By keeping a close eye on the crops and pests and following steps to maintain them, you will be stripping pests of the opportunity to infest the field and spread. Pest control is the key.

Pests, regardless of where they are found, can have harmful effects on humans, plants, or on any living thing for that matter. If they can infest large rice fields, they certainly are capable of infesting your home.

Topbest Pest Control ensures that you won’t ever have to worry about pests lurking in your abode. Whether it’s cockroaches or termites, Topbest can free your home from any kind of pest, at reasonable prices.

Topbest has a complete selection of equipment, all of which are updated, and are eco-friendly. At Topbest, there is a solution for any type of pest you might have in your home, and its technicians and inspectors are well-trained and have expert knowledge in the field.

To find out more about the remarkable services that Topbest has in store, click on this link. Your satisfaction is guaranteed, and your house will be free of pests before long.